Security of Your Coal Supply

Of the coal transported in the United States in 2013, approximately 92% was comprised of thermal coal used for electric power generation. The remainder was transported for industrial use or coke production.

The performance of transportation systems are affected by many factors. Depending on the severity and duration of these issues, a point could be reached where the carrier is not able to recover and deliver the agreed upon tonnage for the year, which presents a real challenge to maintaining coal inventories at desired levels. Some common issues faced by carriers include: 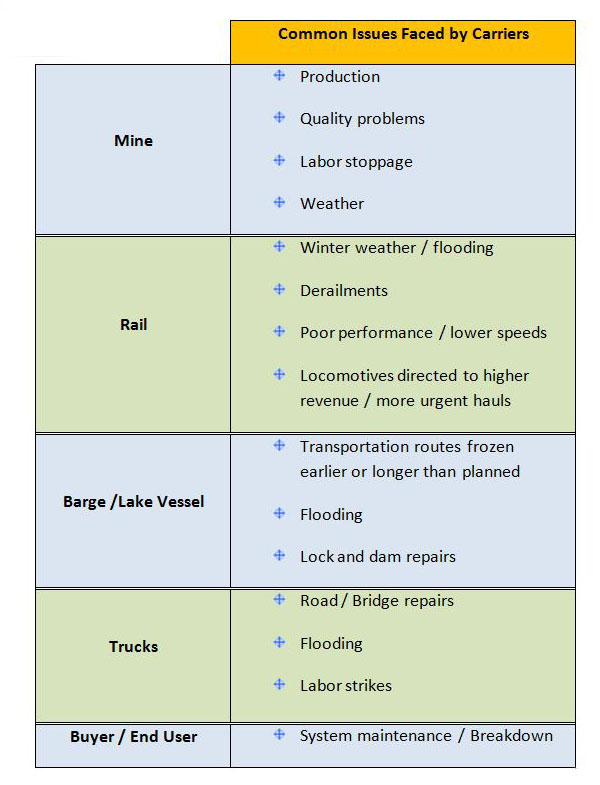 During the first half of 2014, several issues have impacted carriers, such as:

A number of users witnessed the depletion of the stockpiles, a few were eventually forced to reduce or curtail operations. Some had to resort to emergency measures by purchasing and transporting coal from other suppliers or from competitors likely at much higher, distressed pricing. Many coal users are still operating well below planned inventory levels as they near the completion of Q3 2014. 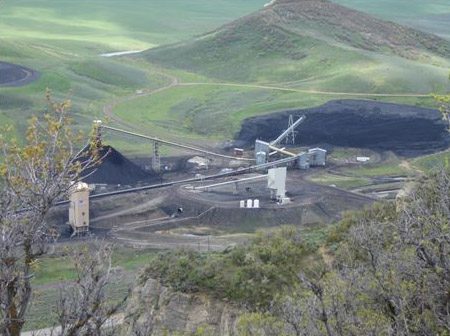 Looking forward, the above issues and disruptions will continue on occasion. However, the biggest concern facing the nation’s coal transportation is the reliability of the aging lock and dam systems.

Lock and dam outages have a significant impact on shipping. An example is Lock 27, the southernmost lock on the Mississippi River, which was closed for emergency repairs in September 2012 after a barge crashed into the auxiliary canal (main canal was under repairs). The impact of the stalled barge traffic was estimated at $2.7 million per day. Lock 27, with new doors, began operations approximately five months later.

The majority of the lock and dam systems were installed in the 1930s with a design life of 50 years and since they have not been replaced or overhauled as required. Currently, many of the locks and dams are in dire need of major repairs or overhauls. Current funding is not adequate. Funding is collected from a $0.20/gallon diesel fuel tax (paid by the barge lines) with a matching contribution provided by the Army Corps of Engineers. 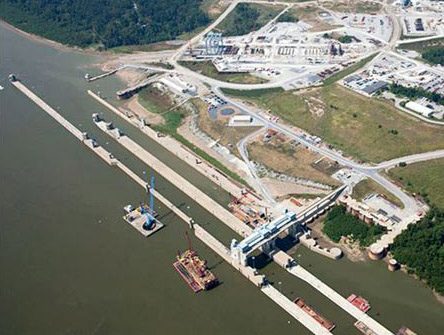 An example of the inadequacy of the funding is demonstrated by the large overhaul project for the Olmstead Lock and Dam near Paducah, Kentucky, which is projected to exceed the original budget by 400%! This project began in 1988 and is not scheduled to be completed until 2024, much longer than originally estimated. Meanwhile, three additional locks, which require $2.2 billion in repairs, are on hold while the majority of the funding is consumed by the repairs at Olmsted. In the opinion of numerous experts, a catastrophic type of failure is possible if the pace of funding and repairs is not accelerated.

Questions to Ask Yourself

PEC Consulting has evaluated and advised many clients on material handling and supply issues. Our diverse industry experience and knowledge of the latest systems allow us to identify risks and present solutions to our clients. We have developed unique material handling systems which can be easily installed and relocated. In many cases, we can recommend systems employing used equipment to reduce costs.

PEC Consulting can review your supply system and present reasonable and real world options to improve your security of supply.

The main contributor to this article was Len Dolby, P.E., Senior Mining Consultant at PEC Consulting Group, Saint Louis, MO. You may contact him at ldolby@penta.net