Maintenance of cement storage silo roofs is challenging because the areas which may need repair are not readily visible and often structural damage is not noticed until a significant failure has occurred, the roof has settled, and the risk of impending total failure has been reached. Often times, when the damage is extensive, operations need to shut down for repairs affecting production and product dispatch. If a bank of silos is involved, the whole cement plant may need to cease operations.

Aging silos often show signs of deterioration, usually visible in the spalling and cracking of the exterior of silo walls. This is due mostly from exposure to the weather. Problems with silo roof slabs are mostly related to critical structural conditions, such as dust buildup, the addition of heavy equipment to the original design, or flaws with the original design. 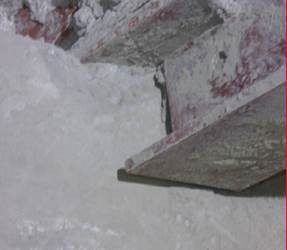 The roof beam supports should have been designed to accommodate for thermal expansion. This is accomplished by allowing the roof beam base plates to freely slide in the longitudinal direction over an embedded steel plate on the wall beam pocket.

The embedded plates that support the roof beams are usually involved in the failure process. Weather and temperature changes cause the concrete walls to deteriorate faster around the beam pockets than the rest of the silo walls. Such deterioration leads to spalling and loosening of the bond between the emended steel anchors and the concrete walls. When such conditions occur, the roof supporting steel beam will eventually rest on unprotected concrete. The constant thermal movement of the beam, combined with the dead and live loads applied on it, results in a grinding force between the beam’s base plate and the silo wall with the eventual result of breakage of a part of the silo wall immediately under the beam. When this happens, the beam shifts downward until it rests again on a solid portion of the silo wall. The roof slab then deflects at which time the failure is usually noticed by the operators.

In some cases, the silo roof slabs experience downward movements. The initial deformation may go unnoticed for a while due to dust buildup and the general age of the silos. Delay in the proper detection could potentially lead to overloading of the slabs, especially on structures with marginal safety factors, since material and water will attempt to “level off” the sunken portion of the slab. As the deflection increases, the buildup grows and eventually the slab and the beams will reach the limits of their structural capacity. Furthermore, the increased loads result in greater friction force between the beams and the walls and could lead to another breakage in the silo walls.

When a silo roof starts deflecting, serious structural damage may have already occurred. Roof structural issues need to be detected at an early stage to prevent collapse of the roof or the inability to use the storage silo’s full capacity. An engineering review of current silo roof structural loads versus the original design criteria for live loads is recommended as a first step in the maintenance of cement storage silos.

This should be followed by visual inspections of the roofs exterior and interior surfaces, the supportive members, connections and roof beam bearing plates. 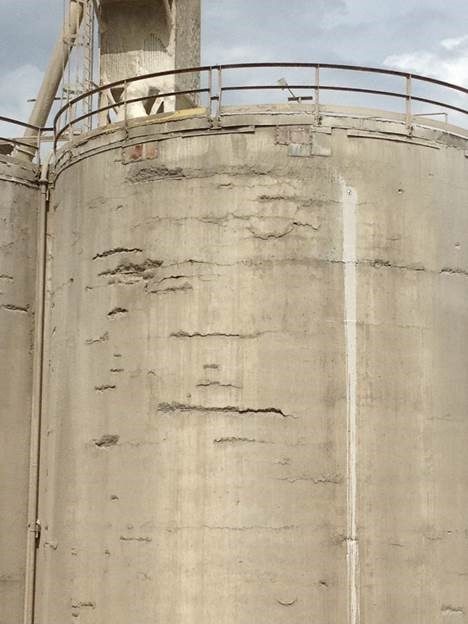 When failure occurs, the first step of the remedial works is the physical inspection of all silo roof beam pockets. This could be accomplished by opening the external pocket plates, if such are provided, or by inspecting the inside of the pockets with cameras.

If the inspection confirms that the cause of the deflection is the deterioration of pockets, the next step is engineering a fix to restore the pockets to their original condition. Engineering must include a rigging system to suspend the affected beams and provide a safe environment for personnel working on the repairs. The next step is the development of a design to restore the sliding surfaces. In most cases this step involves the placement of securing steel plates against the concrete walls to create a box and filling gaps left by spalled concrete with high-strength non-shrink grout.

The third step includes the reinforcement to the existing steel beams designed to carry the additional loads from material used to level the deflected surface of the roof slab.