The Cement Industry is under increasing pressure to become more profitable.  Globally, there is overcapacity of production. To be competitive, Production Units need to optimize operations to the maximum possible level so as to lower overall operating costs without having to make major capital investments. The cost of production depends on several factors, such as location, infrastructure, raw materials and labor costs, type of packaging and, most importantly, the cost of fuel and electricity. Average distribution of production costs can be represented as shown in the following example: 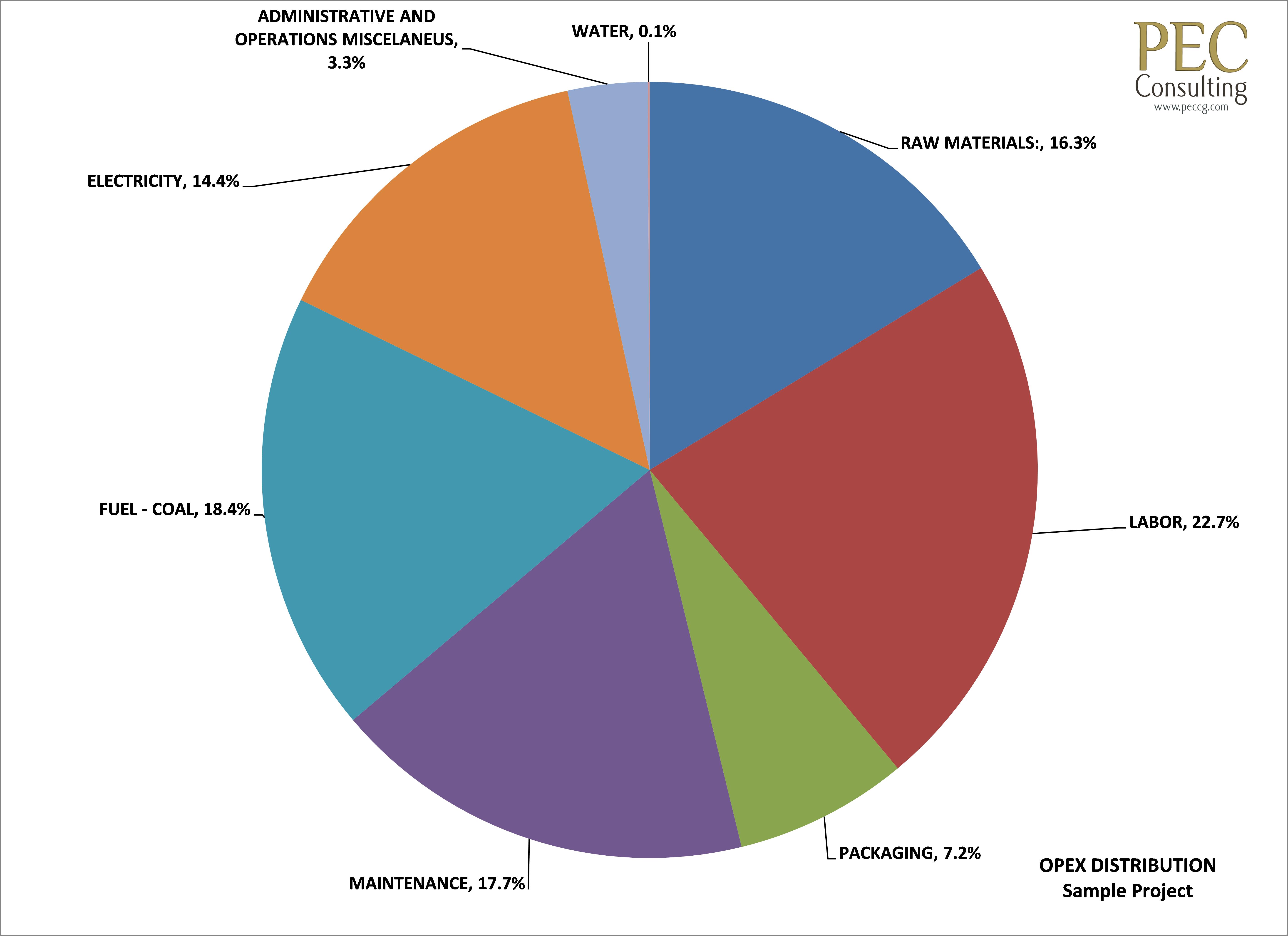 While most factors are location specific, the factor that represents the highest potential for optimization and cost reduction is the actual consumption of fuel and electricity which, in the example above, constitutes 33% of operating costs. Next in line, is the cost of labor and maintenance. Optimizing the operation with the aim of lowering fuel and electricity consumption presents the least expensive way to realize savings. In most cases, this does not involve major investments. Even small unitary savings result in significant profits because of production volume of cement manufacturing operations.

A modern dry process cement plant, with efficient configuration of the grinding and pyroprocessing systems typically consumes less than 700 kcal/kg-cl thermal energy and 100 kWh/mt of electrical energy. Cement plants are designed based on the raw materials and fuel samples tested by the equipment supplier. The equipment supplier guarantees are also based on the test results and under perfect operating conditions. In practice, the quality of the actual raw materials and coal varies. If the operating strategy is not adjusted accordingly, it will result in sub-optimal operations and higher operating costs. This is a problem even new plants need to address. Older plants have less efficient systems, which compounded with operational and maintenance inadequacies result in higher energy consumption. All plants, new and old thus have a potential for optimization.

An energy audit is required to evaluate the operation of a cement plant against the benchmark of similar well-managed plants. After a detailed evaluation of the current raw materials and operating parameters, benchmarks are adjusted to correspond to the specific conditions of the plant. Raw materials are a major variable in this evaluation. Raw mill grindability, for instance, can affect the power consumption of the raw mill section considerably. Based on the results of the evaluation, recommendations are made to optimize the operation in either one, two or three levels: Level 1: Optimize the operation with no or very little investment by adjusting the operational strategy and attending to maintenance areas Level 2: Improve operation through minor investments and staff training Level 3: Incur into bigger investments; however, with payback in a short time. Once improvement potentials are identified, the management can determine based on cost benefits, the program they want to follow. In most cases, there is enough justification for undertaking Levels 1 and 2.

The plant operational and stoppage data is collected over the past one or two years. The reasons for stoppages are analyzed in terms of category (mechanical/electrical/ instrumentation/other), duration and frequency of stoppage, etc. in order to isolate the most detrimental causes for stoppages.

A major part of thermal energy relates to the Pyroprocessing system. For a 1 million mt/year clinker production, savings of 10 kcal/kg-cl would result in yearly savings of approximately $185,000, assuming a heat value of 6500 kcal/kg and coal price of USD120/t.

Apart from the savings at the same production levels, the significant advantage in most cases is that this reduction in heat consumption could be utilized for increasing production later when the demand for cement increases by utilizing the spare capacity of the fan created during optimization.

The audit is done by calculating the heat and mass balance of the Pyroprocessing system. The most benefit generally comes from optimizing the cooler operation; cooler loss is thus minimized, which is one of the main reasons for low heat consumption in a modern plant.

In-leakage in the pyro system also contributes to thermal loss, the extent depending upon where the leakage occurs. This is often corrected by maintenance procedures.

Raw materials chemistry is another factor that is optimized to improve the efficiency within the possible limits of raw materials availability.

At each stage of adjustment, heat and mass balance is carried out to record the improvements.

Large fans and Mill drives are the major consumers of electrical energy in a cement plant.

The fan power in the Pyroprocessing system is also linked to the thermal efficiency of the system. Cooler optimization, arresting In-leakage in the preheater, and maintenance of the correct oxygen level are part of the plant audit.

The fans in the grinding systems depend on the system configuration, which cannot be altered in an existing plant. However, the operation itself can be optimized for reducing the airflow and improving production, which contribute to the kWh/t of fans.

The data collected is analyzed and the findings discussed with the plant operating personnel and plant management.

As a first level, a field visit by an experienced consultant will itself reveal several potential areas for improvement, such as leakages, damaged or nonfunctioning sluice valves in a preheater, gaps in the cooler grates, etc., most of which can be rectified by plant maintenance t without additional investment. This level also includes process adjustments, such as optimizing the oxygen levels, raw mix chemistry, burner, etc.

As a second level, minor investments in the form of replacement of worn or damaged parts, minor duct modifications, insulation, etc. will contribute to improvement in the economy of operations.

In the third category, higher levels of investment will be considered. Examples are changing preheater cyclones to low pressure type, changing to mechanical transport, additional of new instrumentation and control systems.

The identified steps for improvement are classified according to the investment requirements and the recommendations presented to the cement plant.

The cost-benefit analysis of the recommended steps should assist the cement plant strategize the implementation plan. Since the improvements are to be monitored all the way to determine the next steps, a constant involvement by PEC Consulting will help the plant on this effort. Generally, the plant personnel are deeply involved in the day–to-day running of the plant and have very little time to do a systematic evaluation of the plant operation. PEC Consulting can contribute by working with the plant personnel and carrying out a scientific study of the operations. A combination of theoretical calculations and practical observations and feedback from the plant personnel would collectively provide a valuable input to the clients for achieving better performance of the plant, lower energy bills and a potential for higher production when the demand for cement increases.

The main contributor to this Article was Narayana (Jay) Jayaraman, Senior Process Consultant and Technical Director at PEC Consulting Group in St. Louis, Missouri, USA. He may be reached at njayaraman@penta.net