Sand particles derived from sandstone are delivered to the crusher hopper as rocks and boulders. Unlike mine crushing where the purpose is to reduce the size of the rocks to go into mills, the goal in frac sand operations is to liberate sand particles from the rocks while minimizing internal stress fractures in the sand particles.

There are basically two forms of mineral crushers; compression and impact. The compression crusher (Jaws and Cone) breaks the material by compressing the rocks between a movable plate and a fixed plate. Impact crushers can be subdivided in horizontal and vertical. The Horizontal Shaft Impactor breaks the mineral by impacting the material with a moving hammer or bar against impact plates. The Vertical Shaft Impactor (VSI) has a rotor that throws rocks against impact plates.

The Jaw Crusher is used as the primary crusher for lime and frac sand plants, as it reduces large size rocks by compression minimizing dust. A fixed plate, mounted in a “V” alignment, is the stationary breaking surface, while the moving jaw applies force on the rock by forcing it against the stationary plate (see Figure 1). The space at the bottom of the “V” aligned jaw plates is the crusher product size gap. The rock remains in the jaws until it is small enough to pass through the gap at the bottom of the jaws. The Jaw Crusher is usually used as the primary crusher for a reduction ratio of 8:1. This type of crusher usually produces few particles below 1” It has low wear per ton in abrasive materials like silica sand; however, it is more expensive than an impact crusher. 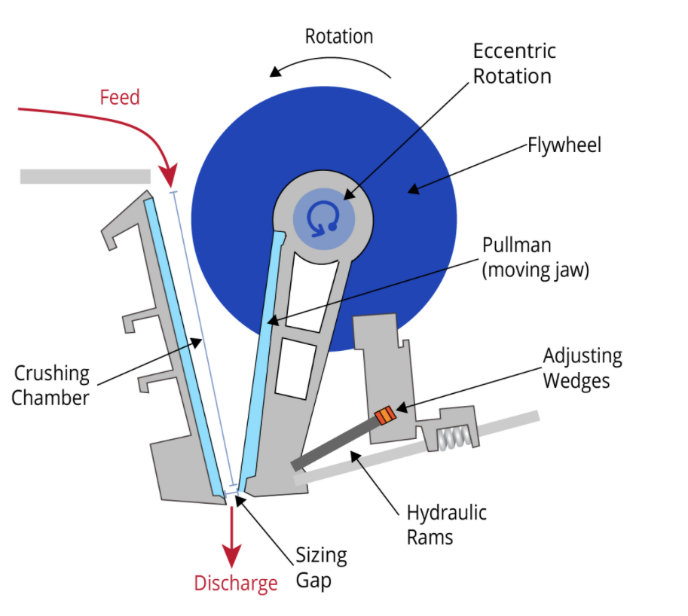 The Cone Crusher is used as a secondary crusher because it can handle smaller feed size than the jaw crusher. The reduction ratio is 8:1. Production drops when producing small particles like frac sand. Its wear cost per ton is less than that of the impact crusher. 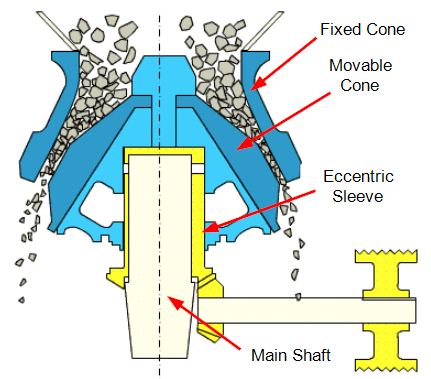 The Horizontal Shaft Impactor (HSI) crusher consists of hammers that are fixed to the spinning rotor (see Figure 3), which break the rocks. Normally, the Horizontal Shaft Impactor crushers are used for soft to mild materials like gypsum, phosphate, limestone and weathered shales. They are usually used as primary or secondary crushers with as much as 24:1 reduction ratio. HSI does not leave internal stresses in the sand particles as may be caused by other crushers.

The big disadvantage of the HSI is that the wear per ton is very high when used with abrasive material. In the frac sand industry, the wear cost and downtime are normally not satisfactory.

The Vertical Shaft Impactor (VSI) has a high-speed rotor with wearing resistant tips that throw the rocks against stationary breaker plates (anvils) made up of composite metal alloys (see Figure 4). The predominant force is the velocity of the rotor that can be adjusted depending on the feed quantity and to avoid stressing sand particles. VSIs are typically used as secondary crushers because their feed design can handle smaller rocks, usually below 8”. 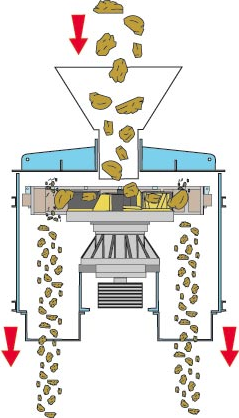 The recommended crushing arrangement to produce the frac sand from sandstone is to install a Jaw Crusher as the primary crusher, followed by a vibratory screen to scalp the small sized material. The coarse materials from the screen are fed to a Vertical Shaft Impactor used as secondary crusher. The secondary crusher and screen are laid out in a close circuit where the fines are sent away, and the coarse rocks are sent back to the VSI.

The extent of Mr. Rios’ experience encompasses the design and successful project management of heavy and light industrial plants, both domestic and foreign, including mineral processing facilities, cement and lime plants. He has been responsible for the preliminary layout and detailed engineering of grinding facilities, cement and lime pyroprocessing systems, coal grinding and firing systems, material handling systems, crushing and screening facilities. He is highly experienced in the preparation of bid documents, contracts, capital and operation cost estimates, evaluation of OEM equipment bids, economic evaluation, and feasibility studies. He was directly involved with the equipment layout and design of waste heat recovery (WHR) and co-generating systems. Mr. Rios is fluent in English and Spanish. He holds a BS in Mechanical Engineering from the Universidad Metropolitana, Caracas, Venezuela, and a Masters in Business Administration, Information Systems and Finance/Accounting from Regis University, Denver, CO. He also holds a Certificate in Economic Evaluation and Investment Decision Methods from Colorado School of Mines, Golden, CO.