Blog - Latest News
Download the PDF
“Lime” is a very general term used to describe virtually all finely divided types of limestone and burned forms of lime. However, by definition, lime is only calcined limestone known as quicklime, calcium oxide, and a secondary product namely hydrated lime (calcium hydroxide) or slaked lime (milk of lime). There are two basic types of limestone – high calcium and high magnesium (dolomitic). The dolomitic quicklimes and hydrated limes correspond to their counterparts in terminology. The only difference is that dolomitic types are a combination of the elements of calcium and magnesium, whereas high calcium limes contain only small percentages of magnesium. Both are produced through calcination at high temperatures. The chemical composition of both lime products is:

Both of the above reactions are called calcination and occur in furnaces known as kilns. The carbon dioxide content of the stone is expelled as a gas. With pure high calcium limestone, 44% of the stone weight is lost; dolomitic limestone loss is 48%. Both reactions are chemically reversible since quicklime absorbs carbon dioxide readily and, in so doing, transforms itself back to the original carbonate form. Pure dolomitic limestone is about 54.5% CaCO3 and 46.5% MgCO3. Note: Other sources of CaCO3 other than limestone can be seashells, corals, and other naturally occurring deposits of chemical by-products. Quicklime has a natural affinity for moisture and carbon dioxide. Therefore, it is perishable. Consequently, it must be stored in dry, moisture-proof areas that are also free from CO2. A more stable form of lime is hydrated lime, which is produced in a hydrator where just the right amount of water combines with the quicklime to produce a fine dry white powder. The purity of the lime is influenced largely by the quality of the limestone and, secondly, by the manufacture. The chief impurities are silica, alumina, iron and for high calcium lime, magnesium. There are other trace elements that can be a problem for some quicklime customers: sulfur, phosphorus, arsenic, manganese and fluorine. In special applications these trace elements have strict tolerances on the amounts of these impurities: e.g., for calcium carbide manufacture – phosphorus; for steel manufacture – sulfur; for baking powder and food manufacture – arsenic and fluorine; for glass manufacture – iron. 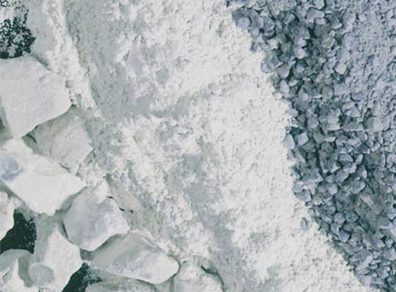 Magnesium Oxide (MgO) is a problem in high calcium lime as it affects the reactivity of the lime. The dissociation temperatures (temperature when CO2 is driven off) for high calcium oxide is about 898°C, while magnesium oxide is about 760°C. This makes the magnesium oxide “hard burned” and therefore, slow slaking and less active. In most applications, other than steel manufacture, MgO is not desirable. The majority of customers for quicklime purchase lime for two main requirements – available lime and reactivity. For available lime (CaO), generally one can calculate the impurities (other than MgO) as double quantitatively during calcination since 44% of the weight of the stone is carbon dioxide which is lost during calcination. Added to this is the loss of lime which combines with these impurities. Also, the amount of non-calcined limestone residue, known as “core”, has the same effect since it is not available. Reactivity is affected by the impurities, the amount of MgO, and the amount of core or unburned limestone. However, reactivity is also affected by burning the quicklime too hard. This has the effect of reducing the core, but can make the lime very slow to react in water. Lime producers have learned to keep the amount of core to a minimum while maintaining a highly reactive lime In summary, the quality of quicklime is affected both by the impurities in the limestone and the degree of burning in the lime kiln. Both are important in the production of high quality lime.   The main contributor to this feature article is Ken Schweigert, PEC’s expert for the non-metallic minerals industries; he has many years of experience in mining and processing of lime, cement, calcium carbonates, aggregates, silica sand, diatomaceous earth, perlite and clays. His expertise includes plant design, selection of process equipment, project scope development, operations improvement, maintenance, plant personnel and equipment evaluations; due diligence analysis and construction services. Mr. Schweigert has a BS in Engineering Management from Missouri University of Science & Technology.